VPNs are generally legal in most of the countries, but still, there are a few countries that have banned VPNs. A Virtual Private Network is a powerful way to protect your online identity and information. With so many hackers just looking for the next victim of identity theft or other shady dealings, VPN can help people to preserve their identity and browse the Internet freely without any worry. 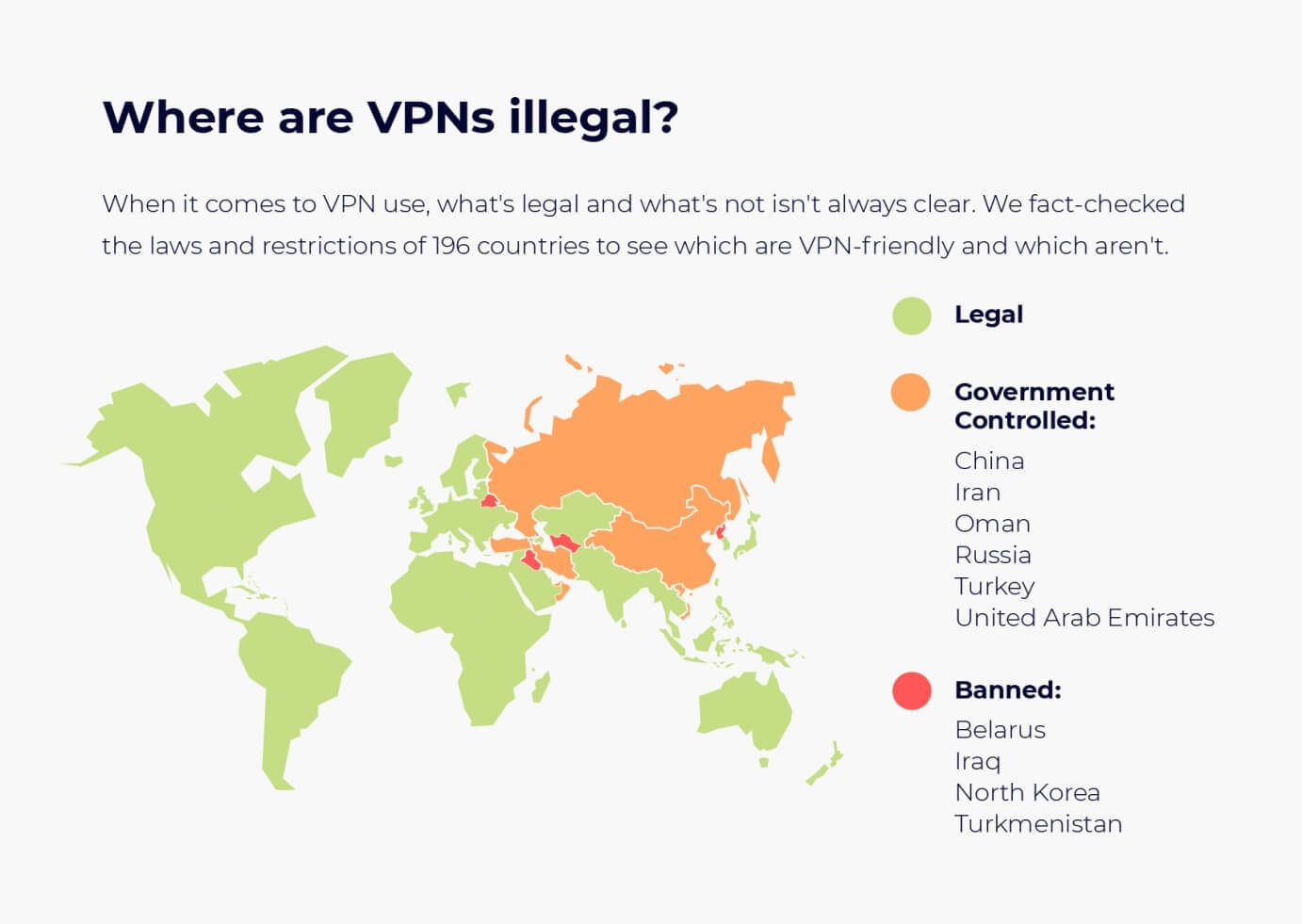 Why VPN is banned in some countries?

If you will look at the list of countries that have banned VPNs, you will notice that they all share a few common characteristics. Their government is known to take dim view of dissenting opinions. Moreover, their government is conservative, authoritarian, and has only single real political party.

These countries don’t like freedom of speech or any close scrutiny from the international community. This is the reason why people living in these countries see bans on blogs, social media, and other resources supporting citizen journals.

The reasons these countries generally give as an official justification to ban or regulation of VPNs revolves around the fact that VPNs aid criminal activities. But, there is no clear evidence that a significant percentage of Virtual Private Network users are criminals.

The control over the information the citizens of a country are exposed to has long been the keystone of maintaining a nation that is short on personal liberty. The internet makes this job more complicated, which makes the eventual flexing of political and legal groups unsurprising.

Iraq has always remained a conflict hotspot on the world stage. The country has severely struggled to return to stability after the fall of Saddam Hussein. ISIS is causing havoc in the country and creating war conditions. ISIS also prefers using social media to promote their propaganda and recruiting the cadets in their terrorist army.

Turkmenistan has only one ISP provider in the entire country and it belongs to the government. The VPN services were totally banned from the country in the year 2015. The users who try to access proxy services or VPN in this country are subjected to administrative penalties and are even summoned for preventive conversations to the Ministry of National Security.

Belarus also banned the access to VPN and proxy services in the year 2015. Moreover, most of the foreign websites are blocked for the country’s citizen by the government. The citizens found using Virtual Private Network or any such services to bypass censorship are subjected to strict punishments.

North Korea has banned VPNs for their local citizens and they are not allowed to access foreign media at all. As a tourist, you can use VPN software. But, the use of the Internet is banned for the North Korean diplomats when they are abroad.

Turkey was one of the most popular Islamic countries that was a prosperous nation and had good relations with the western world in the past. In last couple of years, the country is going through a rough patch of time and is no longer the member of EU. The current government ruling the country is not the fan of social media and has already instituted social media bans when the things in the country have been at their lowest.

A popular Turkish site named – ‘Turkey Blocks’ maps the government’s actions against specific internet services as they happen. It has reported that serious Virtual Private Network crackdowns have commenced in the nation and those are permanent ones. However, few VPNs are completely functional in Turkey.

United Arab Emirates (UAE) is one of the few nations in the world that has the strictest legal punishment regimes against criminals. In 2012, a number of online activists were arrested for spreading non-sense over social media. VPNs are the friends of UAE residents who want to abuse government and this is the reason why Virtual Private Networks are restricted in UAE. People can still use the VPNs if they are not using it against the government.

You might find it hard living in such countries where the use of VPN is banned and the citizens are not allowed to access the Internet privately. The government is always monitoring them and strict punishments are given if they are found using such services.